To get a bird’s eyeview of the islands is one of the best experiences you can have in the Canary Islands. The volcanic landscapes and the beauty of the coastline provide views full of contrasts that are even more impressive when seen from the sky. So, it’s not surprising that the Canary Islands boast a large variety of places to go paragliding. Throughout the 7 islands there are many mountainsides, ravines and peaks that offer high quality take-off sites. As well as the mild temperatures throughout the year, the presence of the Trade winds that blow steadily and constantly, mean that you can enjoy your flight to the full.

We are a paraglider family run company that specialises in providing top quality paragliding holidays, paragliding lessons and tuition, coaching for low airtime pilots, and all levels of Cross country pilot.

Come and fly with us in the winter sun of Tenerife and El Hierro. Tenerife is an excellent and affordable destination with many flyable days during the year.

We have really good flying conditions during the winter from October to March are the best months, mainly to fly in the south side of the Island. The north of Tenerife and El Hierro offer good conditions almost all the year.

With almost 40 sites on the island of Tenerife, there is something for everybody. Easy takeoffs, good landing fields, nice thermals and great opportunities for cross country.

WE FLY EVERY DAY!

Holidays in El Hierro, please check with us!

Holidays and a New paraglider

Tenerife is one of the cheapest places in the world to buy paragliding equipment. See how much you can save, you will be surprised. Please Contact Us for more information.

If you prefer to book your own accommodation, you can still come and fly with us. We fly every day, we meet around 10AM and fly until sunset. The cost is 60 euros per day for guiding and transport. Please book with us in advance. 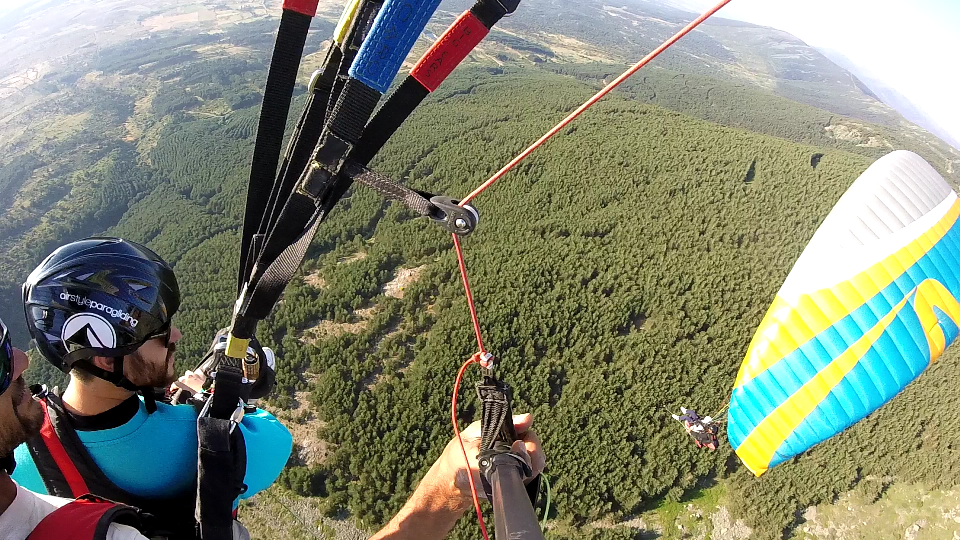 ONE OF THE BEST FLIGHT IN THE HIGHEST AREA OF SPAIN 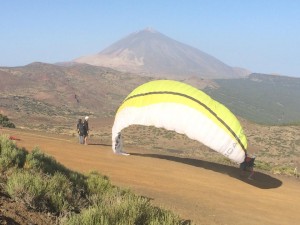 Located right in the centre of Tenerife, Izaña has it all, a fact that makes it one of the best flights in Spain. The take off is situated at 2,300 metres above sea level in the Teide National Park – the highest peak in Spain. From there the 45-minute flight drops right down to sea level, taking you over the beautiful Orotava Valley and to the tourist resort of Puerto de la Cruz.

It is a calm flight with no sudden surprises and mild to moderate winds blowing in a north to north-easterly direction. A gentle slope provides help with take-off in the vicinity of Teide National Park. 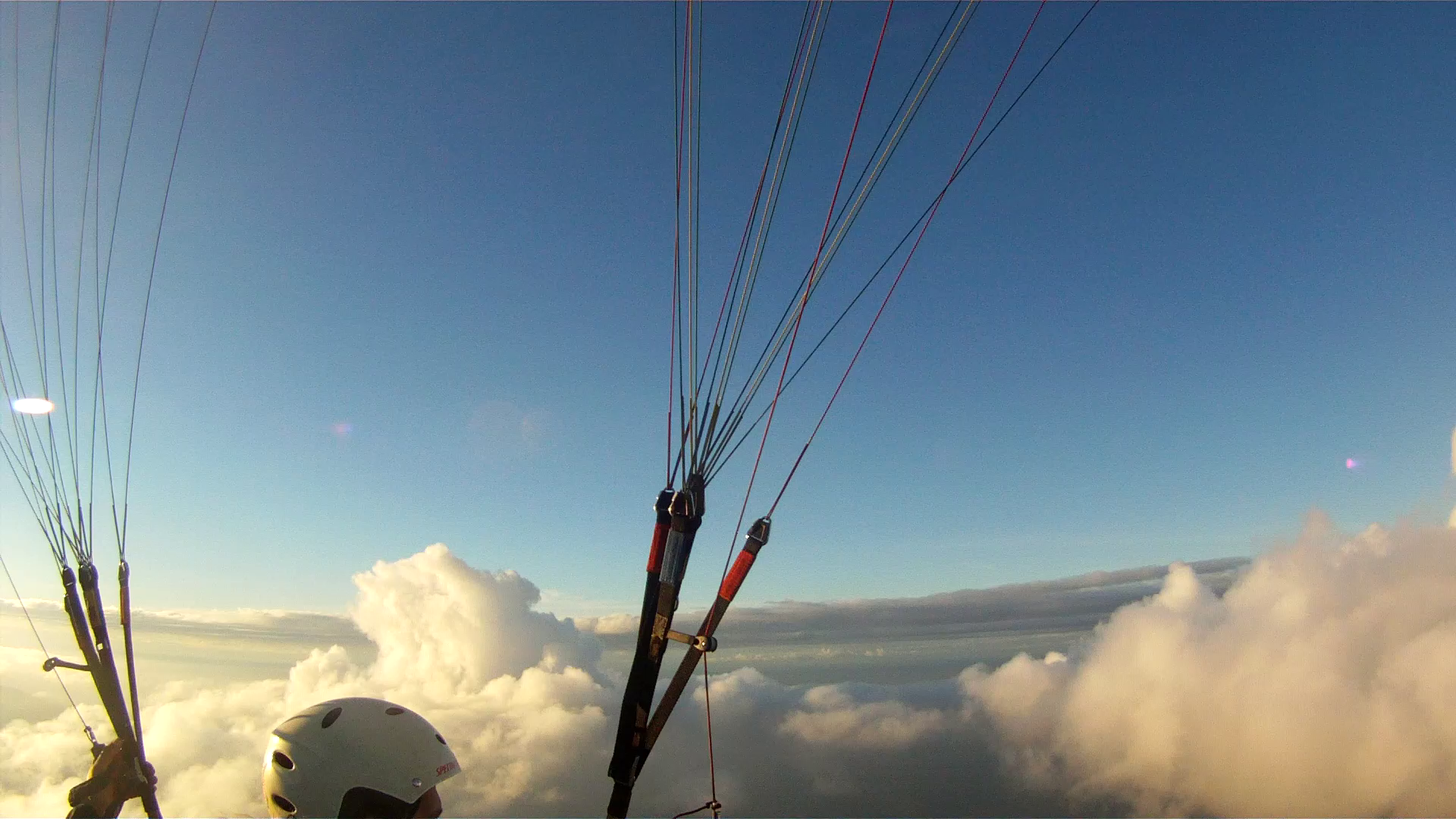 ONE OF THE BEST AREAS IN TENERIFE FOR PARAGLIDING 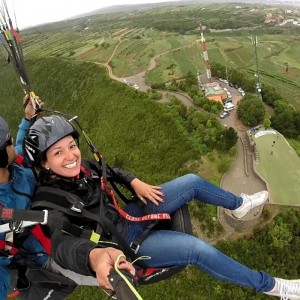 The north of Tenerife is home to one of the best areas for paragliding in Tenerife: La Corona. Situated in the municipality of Los Realejos, the launch site gives a take-off with north-easterly winds of mild to medium intensity. Starting at 785 metres above sea level, the jump flies over Los Realejos down to the landing site on the soft black sand of El Socorro beach. It’s a dynamic, picturesque flight over the pretty hillsides of Tigaiga, the coasline of Punta del Guindaste and the beautiful pine groves of Rambla de Castro. 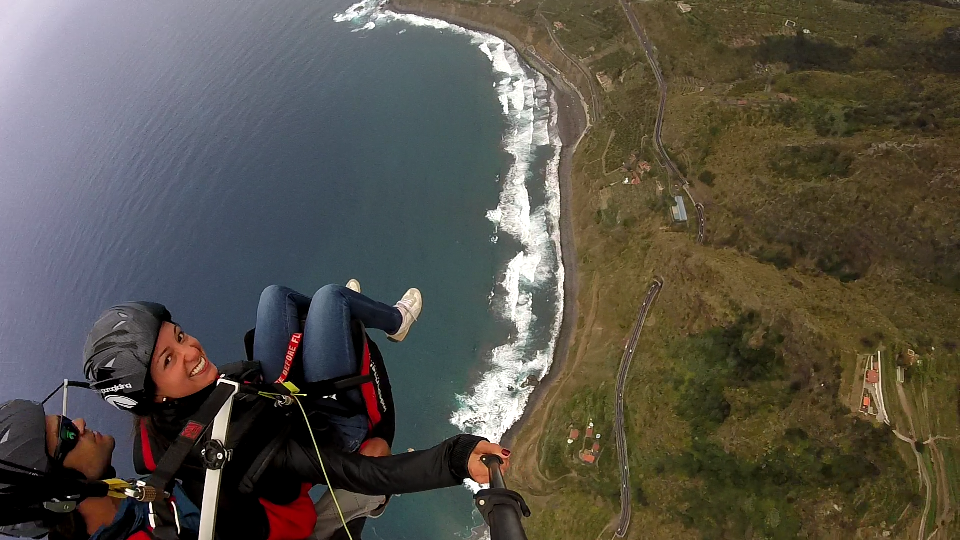 FLIGHTS FOR EXPERIENCED PILOTS IN ADEJE 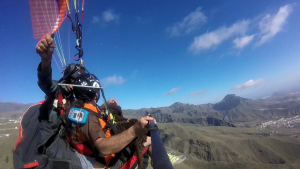 e takes a paragliding jump from Adeje’s mountains. This borough in the south of Tenerife is home to some of the best areas for paragliding in the whole of the Canary Islands, and Taucho is, without doubt, one of them. An attractive site for paragliding enthusiasts, which consistently brings pilots in from all over Europe, however it is a destination recommended only for the most experienced paragliders, due to the fact that this area is very different from the others and the flight is leeward (downwind), not windward (upwind). 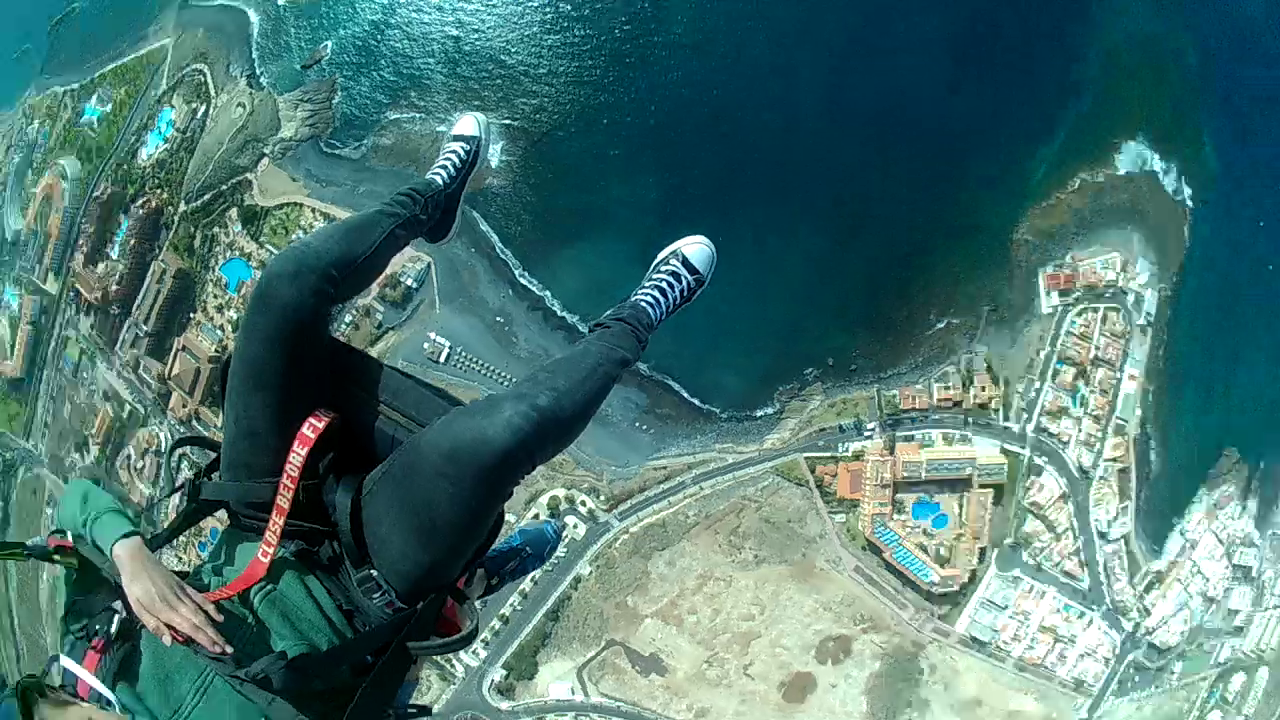 Take off at 1000M. Thermals and cross country.

Fly over the most beautiful parts of the island. Feel the thrill of slicing through the wind while soaking up the spectacular views and the verdant landscapes – and discover a different aspect of the island.

We’ll start with a brief run-through of the flight and the safety requirements. Then we’ll be ready to launch our adventure which will last up to an hour and a half from take-off to landing. Enjoy the spectacular Montaña del Conde and the Barranco del infierno from a different perspective. 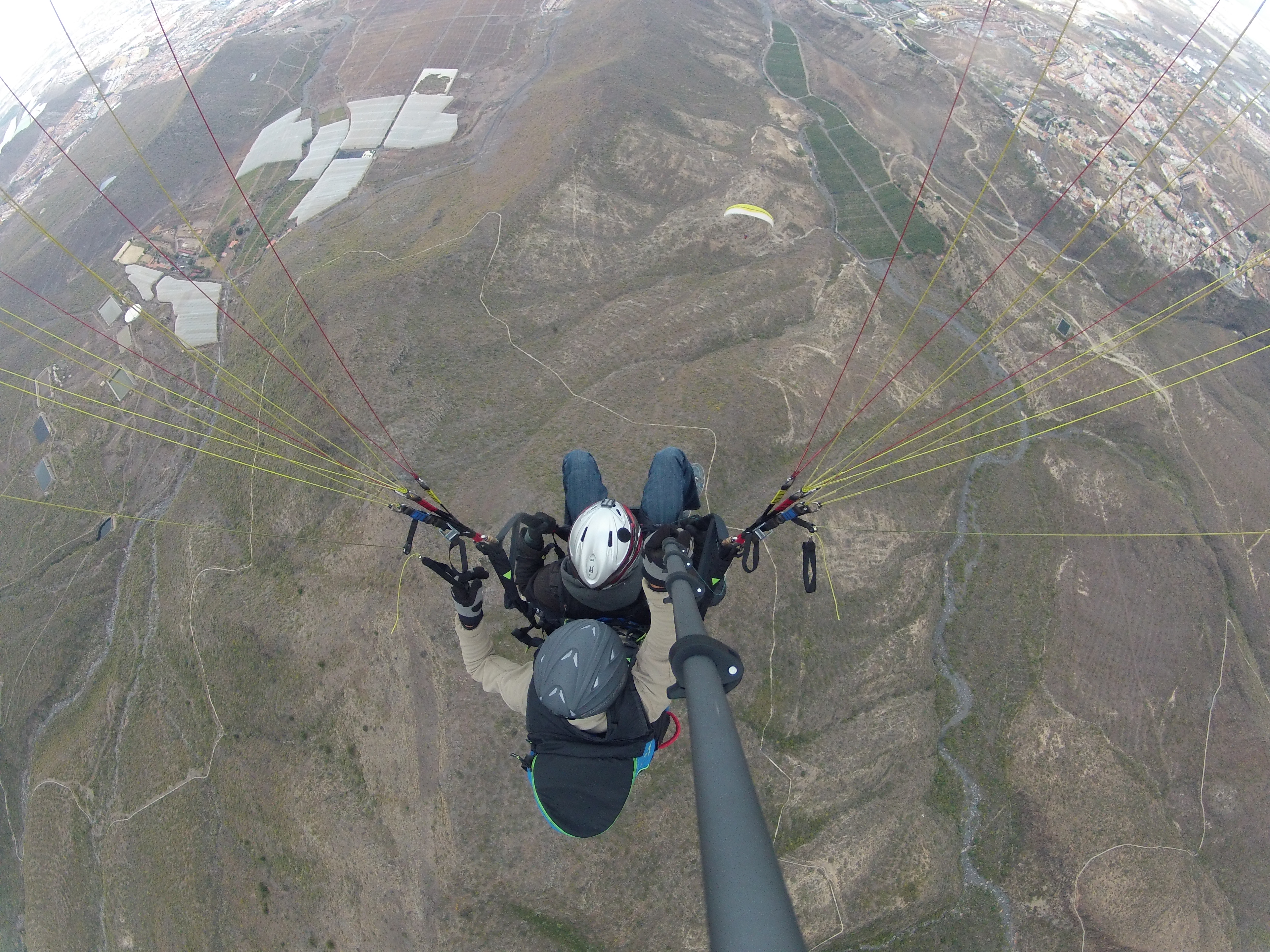 Take off from different altitudes in El Hierro 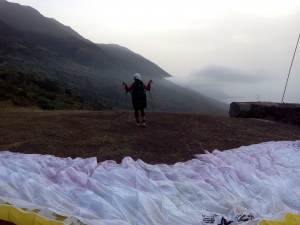 Situated in the north-west of El Hierro, the Dos Hermanas peak is one of the best places in the whole of Spain to practise paragliding. The southernmost of the Canary Islands offers fabulous conditions that make a flight here really spectacular. The trade winds, the orientation of the land itself and the possibility to take off from several different altitudes make this the ideal spot for learning and acrobatics. In fact, the island has hosted an important international annual gathering of paragliding pilots for the past 20 years, which attracts enthusiasts from all over the world. 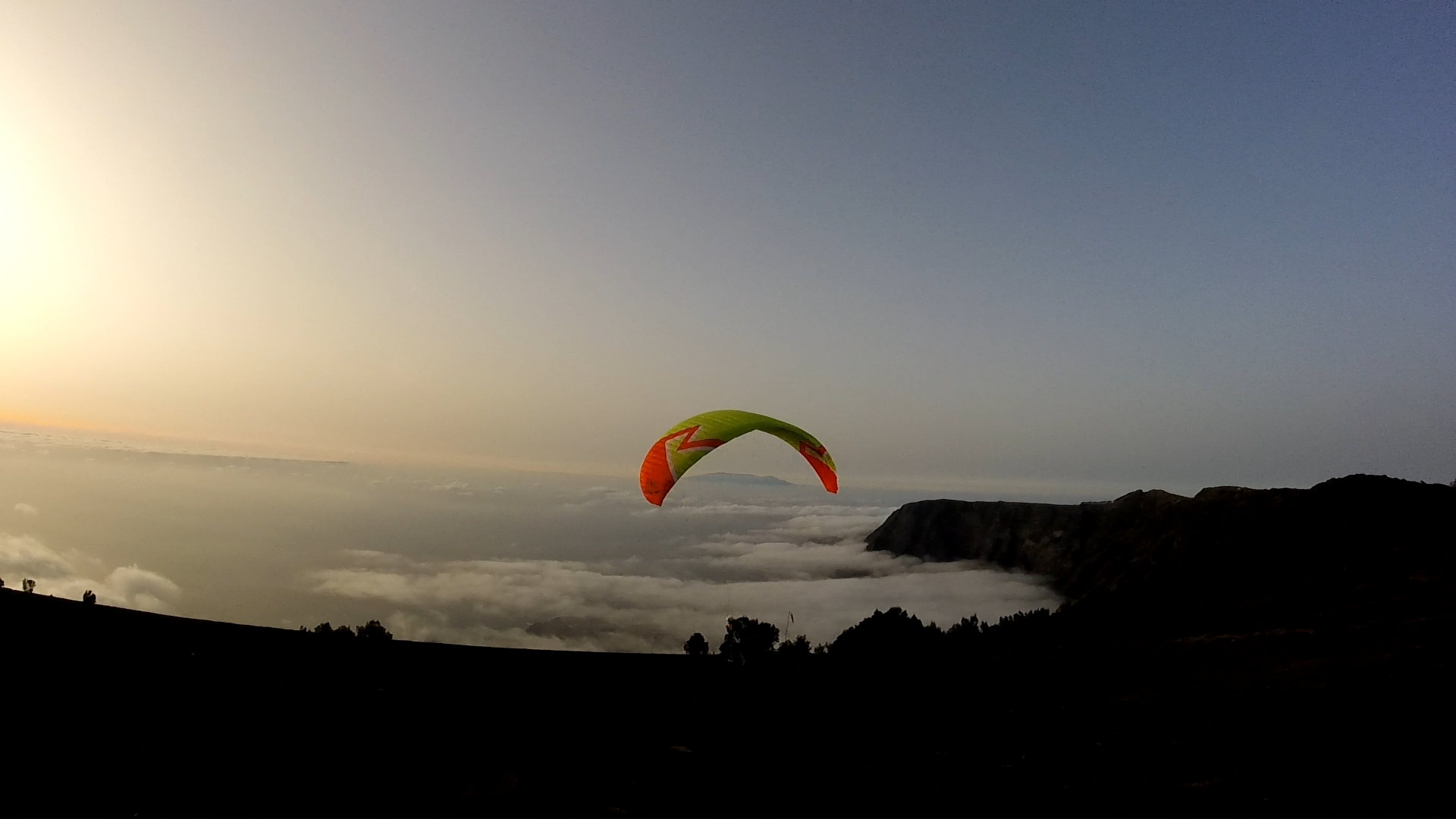 El Hierro’s most popular flight, over El Golfo Valley, can be taken from different altitudes of the Dos Hermanas peak (in Frontera). No matter which take-off site you choose: 1200, 1000, 800 or 600 metres above sea level, there are termal lift conditions which allow paragliders to spend hours in flight, enjoying the magnificent scenery from the Arenas Blancas beach to the Roques de Salmor. The landing site is located in Frontera, just beside the bus station.